Home > Health > 6 Reasons your Chicken has a Nosebleed
Health

6 Reasons your Chicken has a Nosebleed 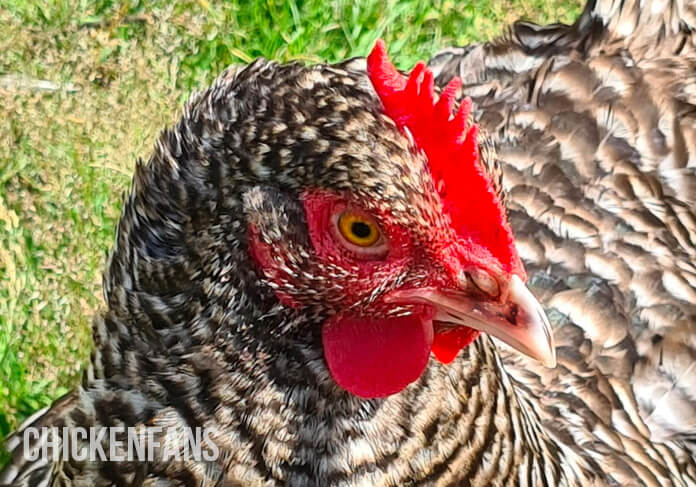 It can look scary if you find your chickens bleeding through the nose. Apart from occasional injuries, it's a clinical sign that should be taken seriously.

We discuss six causes of nosebleeds in chickens:

The most common cause of blood on the nostrils is a plain injury. When there aren't any other clinical signs of illness, chances are the chicken has hurt itself.

Injuries happen all the time:

In case of minor damage, you can just wipe off the blood. Do a quick inspection to rule out a broken beak or head injury.

If you notice symptoms other than a bleeding nose, it's probably a medical condition.

Infectious laryngotracheitis is an upper respiratory disease caused by the herpes virus. Affected chickens sneeze, cough, and have nasal discharges. It's not uncommon to see some blood in the mucus. Some blood-tinged discharge can come from the nostrils.

The symptoms appear one or two weeks after infection. Other symptoms of infectious laryngotracheitis are:

It's challenging to diagnose infectious laryngotracheitis since it resembles many other respiratory diseases. Only a vet can make a correct diagnosis. It's not the only respiratory disease that can cause nosebleeds and sinusitis.

Since the disease is caused by a virus, antibiotics have no effect, and you have to let it run its course.

Chickens have a complex respiratory system with air sacs, air passages, and sinuses. Their noses are susceptible to bad air quality, resulting in nosebleeds.

In hot weather conditions, the air quality of the chicken coop can quickly worsen. Bacteria digest chicken droppings and thereby produce ammonia fumes. These fumes irritate a chicken's nostrils, eyes, and respiratory system. Just like in humans, a dry, irritated nose can start bleeding. If you open the chicken coop and smell a pungent odor, it's time to provide them with proper ventilation.

Proper ventilation removes moisture, carbon dioxide, and ammonia via the roof or upper openings in the chicken coop. The lower part should not have too many gaps to prevent chickens from sitting in the draft.

This dust can irritate and dry out the nasal cavity of chickens and ultimately lead to a bleeding nose.

Some people add diatomaceous earth to the chicken coop bedding as pest control. Diatomaceous earth is a white powder that consists of tiny sharp hard-shelled microalgae. It's used as an insecticide and has many industrial applications due to its mild abrasive properties.

Dusty environments with diatomaceous earth can irritate, dry out and harm the sensitive surface of the nasal septum of a chicken, resulting in nosebleeds.

Vitamin K is an essential vitamin for proteins that regulate blood clotting. The nasal septum in chickens has tiny, fragile blood vessels that can burst easily. Chickens that lack vitamin K can bleed easily and suffer from re-occurring nosebleeds.

Vitamin K can be found in several green leafy vegetables and herbs, such as spinach, Brussels sprouts, broccoli, and parsley. Fresh food is better since freezing can destroy vitamin k. The vitamin K found in vegetables and herbs is nontoxic at very high dosages. However, some other ingredients can be. For example, parsley contains high levels of oxalic acid.

Most commercial rat and rodent poisons rely on a mechanism that depletes the body from vitamin K. Ingestion of rat poison can result in a vitamin K deficiency and make your chickens prone to internal and external bleeding. One of the first symptoms is blood coming out of the nostrils.

Some symptoms of rat poisoning, or rodenticide, are:

Be very alert when you notice nosebleeds combined with blood in the droppings. The symptoms can take a couple of days after eating the rat bait. The antidote is to give them very high concentrations of vitamin K1. Active charcoal is only effective in the first hours after ingestion.

Chickens can also get sick when they eat from poisoned rodent carcasses. Check out our article on preventing rats in the chicken coop, without using rat poison.

Sinusitis in chickens is an inflammation of the sinuses, which are air-filled spaces surrounding the nasal cavity. In case of a sinus infection, these spaces fill up with mucus and pus, resulting in a plugged nose. Viral infections and poor air quality can provoke sinusitis.

An infection can lead to nasal and eye discharge as the sinuses link to the nostrils and eyes. Irritation in the nose or chickens scratching their nares can result in nosebleeds.

Several diseases can result in sinusitis. While Infectious Laryngotracheitis and avian influenza are known to result in blood-tinged nasal discharge, other causes are:

Nasal discharge and pus can build up in the sinuses and nasal cavity and burst blood vessels. Some of these diseases can result in severe damage when the sinuses are not drained with antibiotics.

If your chicken has some blood on her nostrils without showing any clinical signs of illness, it's probably an injury. The bird will probably be all right when it doesn't come back after wiping.

However, it can also be the result of an underlying condition. Several upper respiratory diseases can cause sinusitis. The build-up of discharge, pus, and the irritation that comes with it can cause tiny blood vessels in the nasal septum to burst. Infectious Laryngotracheitis is frequently observed with some blood-tinged discharge.

A chicken's respiratory system is complex and susceptible to poor air quality. Hot weather, gases, and ammonia build-up can all irritate a chicken's nostrils. This can cause irritation and result in a bloody nose.

Vitamin K plays a vital role in the clotting of blood. Chickens with a deficiency will bleed excessively from minor injuries, such as scratches on the nasal septum. Vitamin K deficiency can result from a poor diet but also from ingested rat poison.

Rodent poison generally relies on a mechanism that depletes the chicken from vitamin K. Chickens eating rat poison or poisoned carcasses suffer from internal bleeding, nosebleeds, and blood in their droppings.