Home > Health > 10 Reasons Your Chicken is Shaking its Head
Health

10 Reasons Your Chicken is Shaking its Head 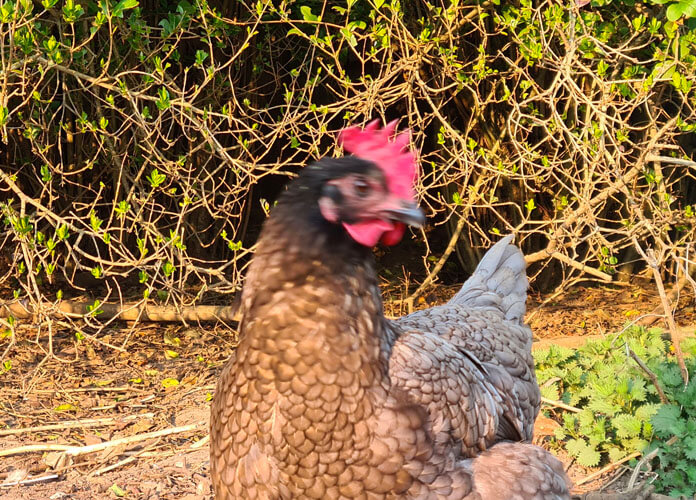 Chickens are shaking their head for different reasons. When head-shaking and scratching become more frequent, it can indicate an underlying condition. Should you be worried?

Why does a chicken shake its head?

Chickens naturally shake their head from irritation. It's usually something innocent like annoying flies, a difficult swallow, or water in their nares. Lice and mites can cause itchiness, but often the cause is an underlying disease like an ear infection, respiratory disease, or a neurological disorder.

Head shaking is not a problem per se. It's part of a chicken's natural behavior. They don't have hands as we do to scratch our faces or pick our noses.

Some innocent reasons are:

But if you notice one of your chickens continuously shaking and scratching its head, this can be a sign of an underlying condition. Parasites or infections might be causing the itchy throat, ears, or eyes.

Let's go over them one by one.

Chickens shake their head when their throat is irritated. A chicken's throat is pretty different from our throat.

When chickens eat, their food isn't just passing through the throat to their stomach. They have a crop that buffers the food before it goes to the stomach. This handy pocket allows them to eat more than the stomach can handle in a single go.

Sometimes this crop can get partially blocked by food that get's stuck. This happens quite frequently when chickens swallow feathers, bedding, or long blades of grass.

This blockage irritates their throat, and they will try to get things moving by shaking their head vigorously and drinking a lot. You can see the stretching of their neck and trying to swallow.

If you check by hand, an impacted crop feels large and hard. You can try to massage it out, but it's important to contact a vet if the blockage is severe because crop impaction can worsen rapidly.

External parasites like mites, lice, and fleas can cause irritation. Some parasites, like fleas, attach themselves to the skin of a chicken and cause continuous irritation. You can literally see the hens trying to shake the parasites off their head.

Red mites, however, are blood-sucking parasites that hide in cracks and crevices of the chicken coop during the day. They only leave their hideouts to bite and feed on the birds at night. This leaves the flock with bite marks, skin irritation, rashes, and scarring.

The biting also disturbs the birds in their sleep. The lack of sleep will cause them to be more stressed during the day and walk around shaking their head.

Getting rid of red mites can be really tricky without pesticides.

A gapeworm is a tiny red parasitic worm that nestles in the windpipe of a chicken. Gapeworms feed on the chicken's blood and cause small internal nodules and damage to the chicken's respiratory system.

After infection, multiple worms will host in the windpipe, making it difficult for them to breathe properly. The worms are especially problematic for smaller chickens with smaller windpipes like bantams and young chicks.

Apart from shaking their head, you will also see them:

Chickens become infected by eating contaminated food or water or eating intermediate hosts such as earthworms or slugs. The infection can be treated with medication.

Another prevalent cause of respiratory issues in chickens is Chronic Respiratory Disease.

It attacks the respiratory system of a chicken and causes several symptoms like:

The bacterial infection can be treated with antibiotics.

Chickens have ears, quite well hidden behind some stiff feathers on the side of their heads. Apart from hearing, their ears are also important to keep their balance. The ears consist of 3 major parts:

Multiple bacteria and fungi can affect the ears of a chicken. Typical examples are infections with the E. Coli or Pasteurella bacteria, responsible for many diseases in poultry.

Outer and middle ear infections will cause itchiness, and you will see chickens frequently scratching, rubbing, and shaking their head.

Inner ear infections can have a neurological impact and will cause coordination issues. Chickens will tilt their head, get out of balance, shake their heads and keep their heads in strange positions (wry neck).

Infectious coryza is a global bacterial disease that spreads quickly once it has infected a flock. Like Chronic Respiratory Disease, it targets the respiratory system of a chicken.

There can be a foul-smelling discharge on the beak and nares of the birds.

The swollen face and sinuses, nasal discharge, and eye tearing cause a lot of discomforts, and chickens frequently shake their head in an attempt to get some release.

Infectious laryngotracheitis is a contagious viral disease affecting a chicken's respiratory system and eyes. It is caused by a herpes virus in the same family as Marek's Disease virus, which we'll also encounter later in this list.

The infection manifests itself in a mild and severe forms. You can even encounter blood in the chicken's mouth in severe cases.

Chickens can be vaccinated for infectious laryngotracheitis, but vaccinated birds still spread the virus.

We finish the list with two other terrible viral diseases that you hopefully will never have to encounter in your life. They come with a lot more symptoms than a chicken shaking its head.

Marek's disease is a widespread global disease caused by the herpes virus. Worldwide vaccination has been successful over the years, but some severe virus strains recently beat the vaccines and caused outbreaks.

The disease evolved over the years and is still evolving. It causes paralysis, cancerous tumor growth, and ultimately death. Once a chicken gets infected with the herpes virus, it will stay dormant in its body.

In the neural form, the virus affects the nerves of the chicken, which can cause respiratory problems and neck paralysis. The problems usually start with the sciatic nerve causing leg paralysis. Chickens fall on the ground and get really sick. The disease is much worse than a chicken shaking its head. In the visceral form, it grows tumors on the internal organs.

We have an in-depth article on the symptoms and dangers of Marek's disease virus. We go in-depth on the latent and lytic replication stages of the virus.

Newcastle disease in chickens is a worldwide contagious viral disease. Vaccination has phased out the disease in many geographical regions, but the virus is still present in many countries. New vaccine development is showing promising results.

The virus is in the top 5 causes of death worldwide and can attack all systems of a chicken:

Most common are respiratory issues, such as:

When the disease attacks the nervous system, things get worse:

Not all strains of the virus are severe. Some mild variants of Newcastle Disease don't have such severe manifestations.

Recently the virus has become very popular in the scientific community as part of cancer treatment. The virus has the exceptional ability to out-replicate and attack cancerous cells. For more information, check our in-depth article on Newcastle Disease.

Chickens shake their head when something irritates their throat, eyes, ears, or other parts of their face. It's standard behavior and is of no concern if it happens sporadically.

However, if a chicken is frequently scratching and shaking its head, it can be a symptom of an underlying condition. We covered a lot of culprits:

If you notice any strange behavior and symptoms or the head-shaking worsens, contact a vet to make a correct diagnosis.