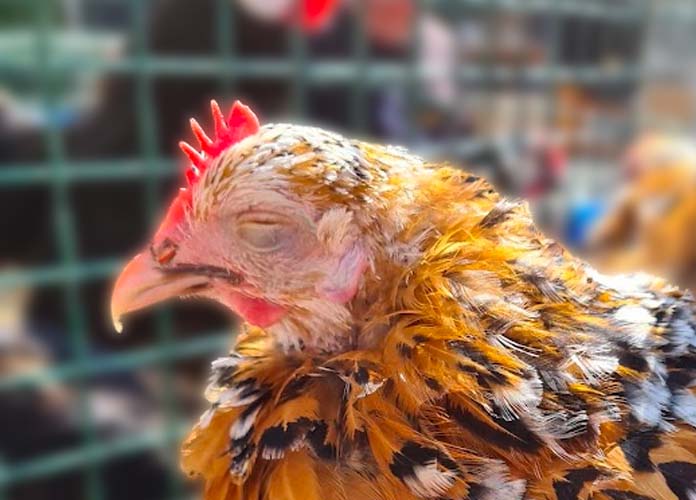 Chronic Respiratory Disease is one of the most common bacterial infections threatening flocks worldwide. Once it enters the flock, it's there to stay. Is it possible to keep it out and what to do when one of your chickens is infected?

What is Chronic Respiratory Disease in Chickens?

Chronic Respiratory Disease, or mycoplasmosis, is a widespread bacterial disease that targets the upper respiratory system of a chicken. Birds have watery eyes, nasal discharge, cough, and gurgling sounds. Although it's one of the most common diseases out there, it can be difficult to treat and eradicate once it enters a flock.

The mycoplasma bacteria attack chickens that are under any kind of stress. An infection can survive latent in a chicken's body, only to pop up suddenly when the chicken is under stress. Once the disease develops, it's very contagious and has several ways of replicating through a flock.

Mycoplasmosis is one of the most common diseases seen at veterinarian offices. Roosters and young pullets usually suffer the most from an infection.

Chronic Respiratory Disease is an upper respiratory infection, and all symptoms are related to respiratory distress. At first, it can look like a mild eye infection. When the infection worsens, birds have difficulty breathing and nasal discharges.

Symptoms of Chronic Respiratory Disease are:

Oftentimes, mycoplasmosis comes along with other infections and diseases as a complication. In those cases, many more symptoms can appear.

The severity of the symptoms varies with vaccination status, involved strains, immunity, and age. Symptoms are usually milder for older hens. Ultimately, when the air sacs and lungs of the chicken become infected, the disease can be fatal.

Diagnosis can be difficult as the symptoms are very similar to other respiratory diseases such as:

Only a veterinarian can make a correct diagnosis. The most common way to diagnose is by using a real-time PCR test.

Chronic Respiratory Disease is contagious and can be introduced into the flock via infected birds. These can be other chickens, but also turkeys or wild birds. The bacteria can also be brought in via clothes, shoes, equipment, or even our skin.

Once inside the flock, the bacteria spread via direct contact, contaminated food and water, and aerosols in the air. Unfortunately, the infection also spreads through the eggs, making it challenging to eliminate the bacteria in an infected flock altogether.

Spread is usually very slow and distribution through the air is probably not the primary propagation route.

Mycoplasmosis in chickens is not contagious to humans and poses no health risk. Some Mycoplasma can affect humans, but the ones that do are different species than the ones infecting our birds.

Several antibiotics can help in the fight against mycoplasmosis, but none of them will thoroughly remove the bacteria. Once a flock gets infected, the bacteria are there to stay. Antibiotics can only help recovery and decrease transmission to other chickens.

The disease stays dormant in the flock for a lifetime. Therefore, it requires treatment on a monthly basis to keep the disease suppressed. If you introduce new birds to the flock, they will probably get infected too.

Many flock owners choose to depopulate and replace the flock with new birds. Even when replacing all birds, it's essential to disinfect the premises thoroughly to eradicate all the bacteria.

Since Cronic Respiratory Disease stays in the flock for life, the birds must be treated continuously with medication. This chronic use of antibiotics has a substantial risk of bacteria becoming resistant to the antibiotics.

To tackle this, scientists are searching for alternative herbal medicines to replace antibiotics. In 2017, researchers discovered that extracts of the Meniran plant are highly effective against Mycoplasma gallisepticum.

Meniran herbs contain multiple bioactive compounds with antibacterial activity, such as terpenoids, alkaloids, flavonoids, saponins, and tannins. Later studies confirmed these results and reported that Meniran extract 65% supplementation had a significant effect on the chicken's health.

While these results are promising, don't expect the same substantial improvements from herbal remedies compared to antibiotics.

Even after recovery, birds carry the bacteria latently in their body. These bacteria don't cause any clinical illness symptoms, but they do impact the chicken's body. The main side effect is a small but significant chronic decrease in egg production for egg-laying hens.

The same applies to chickens that are vaccinated with attenuated live vaccines, as we will discuss later.

Many chickens are carriers of the bacteria but don't show any symptoms until they become stressed. Stress can emerge in many forms.

Example risk factors that can trigger stress-induced mycoplasmosis include:

It's not always obvious what the stressors are, and sometimes it doesn't take much to get to the tip-over point. Even a sudden change in weather and climate can trigger enough stress for Mycoplasma to take over.

All these measures are critical when dealing with baby chicks. It's a long list of criteria, but most of these measures should be part of your standard daily routines. It helps to add antibiotic supplements to the drinking water in stressful scenarios.

Now, there is something to be said about vaccination.

There are two types of vaccines available:

Bacterins are the safest because they are completely inactivated and can't make chickens sick. But they aren't commonly used as they come with a high cost. They are also less effective than live vaccines as they can only temporarily control infections and don't have a substantial effect on protecting a chicken's respiratory system in the long term (Kleven). Therefore, birds need to get repeated doses of the vaccines.

The live vaccines are much more effective, but they contain the actual bacteria. They are virulent and come with adverse side effects. Vaccinated flocks have a decreased egg production compared to entirely unvaccinated flocks. Scientists researched 132 commercial flocks and reported a difference of about eight eggs per year per layer hen. This difference is negligible for small backyard flocks but substantial for larger poultry farms.

The most significant disadvantage of live vaccines is that they make the birds sick. They carry the disease and will spread it to other birds. That's a tremendous problem for chicken owners that also keep turkeys. In turkeys, the condition is much worse than in chickens and comes with severe symptoms. Especially the F-strain-based vaccines are very virulent.

Currently, scientists are researching new ways to overcome the issues with the existing vaccines. These vaccines are using modern techniques, such as the development of a recombinant adenovirus-based vaccine. These novel vaccines show promising results and chances are they will be more efficacious and less expensive than the current options.

Some sources estimate that 65% of the world's chicken flocks carry Mycoplasma bacteria. It's a worldwide disease, but the prevalence varies per country.

For example, in Ivory Coast, the prevalence of Mycoplasma gallisepticum in 2021 surpassed the 90%-mark in eighty health-improved modern poultry farms. On the contrary, in Belgium, the prevalence of M. Gallisepticum in layers and broilers was lower than five percent. Researchers assume this is mainly because the eggs for breeding are under official surveillance in Belgium.

Interaction with other Bacteria and Diseases

Chronic Respiratory Infection is caused by Mycoplasma gallisepticum and uncomplicated infections in chickens are generally relatively mild. Unfortunately, the bacteria usually join an army of other bacteria. Especially E. coli infections are typically coming along. An E. Coli infection results in severe inflammation of the chicken's air sacs, heart, and liver.

Actually, Mycoplasma gallisepticum is only one type of Mycoplasma. There are several genera and only some of them will lead to Chronic Respiratory Disease. When a vet or lab tests for Chronic Respiratory Disease, they make a differential diagnosis to isolate the pathogenic mycoplasmas. That's why they use a PCR test. It's a molecular test that analyzes an upper respiratory swab looking for the genetic material of Mycoplasma gallisepticum.

Mycoplasma is a remarkable genus of tiny bacteria that lack a cell wand. That's why they are exceptionally resistant to several antibiotics. Most antibiotics kill bacteria by destroying their cell wand.

Hundreds of varieties exist that cause respiratory diseases in animals, insects, and humans. Some types can even affect plants. They all come in various shapes and with a size of around 100 nanometers, they are among the smallest organisms yet discovered.

It is mainly Mycoplasma gallisepticum that is causing Chronic Respiratory Disease in chickens, turkeys, pigeons, and other birds. However, chickens can also suffer from a concurrent infection with Mycoplasma synoviae. These bacteria also affect the bones and joints of a chicken, on top of the respiratory system.

Chronic Respiratory Disease, or mycoplasmosis, is a widespread stress-induced bacterial disease that affects the upper respiratory system of chickens and other birds. It's a very persistent disease, and once it enters the flock, it's there to stay. Although it can be treated with antibiotics, the bacteria will survive latently in the chicken's body.

Once your flock is infected, you have to choose to depopulate or carry on with the flock in the knowledge that the infection is present. No other chickens can be introduced or removed from the flock.

There are multiple vaccines available on the market. Some vaccines are based on deactivated bacteria and are very safe in use. However, they are less effective, costly, and must be administered regularly. Other vaccines are based on live bacteria, but they will infect your chickens and spread through the flock. This is especially problematic if you have turkeys, as the disease is much more severe for turkeys.

Chickens that survive an infection won't show clinical signs of illness but will have some side effects like decreased egg production. This also applies to chickens that are vaccinated with live vaccines.