Home > Breeds > Malines Chicken: All About This Large Breed
Breeds

Malines Chicken: All About This Large Breed 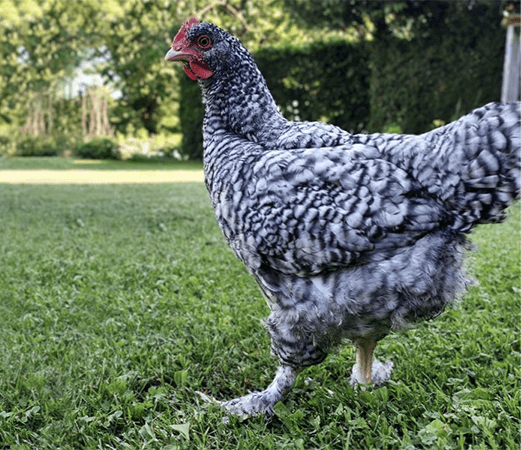 The Malines, or Coucou De Malines, is a Belgian breed of domestic chickens. They're quite large and heavy but make excellent pet chickens because of their friendly nature and decent egg laying skills. As the Malines chicken is not the most common breed, it might be worth considering keeping them in your backyard.

Let's find out all there is to know about the Coucou De Malines. We'll start with the key takeaways:

A Malines is a heavy chicken breed, along with the Jersey Giant, one of the largest chicken breeds. It's bred as a meat bird but is also a decent egg layer. The Malines' build is what you expect of a meat bird; large and heavy with a big muscular chest and long horizontal back.

Roosters can weigh more than 11 pounds (5kg), and females weigh around 9 pounds (4kg). There is also a Bantam version of the Malines chicken, but it's not that widespread.

Malines birds have a reasonably big head with a relatively small white beak. Their wattles, single comb, and earlobes are bright red. The dense feathering makes them very cold-hardy birds, although their large comb can be prone to frostbite. Shanks and toes are white and feathered.

Eight plumage colors of the Malines are recognized in Belgium, where the chicken originated from. In Germany, nine colors are found. The most common color is the black cuckoo pattern, but blue and white are gaining popularity.

The Malines breed originates in the Malines village in the province of Antwerp in Belgium. The name in Dutch is pronounced 'Mechelse Koekoek' or 'Cuckoo De Malines'. It was originally bred as a table bird in the mid-nineteenth century by cross-breeding various breeds of Oriental chickens, like Cochins, Langshans, and Brahma's, with local cuckoo-patterned birds.

The Malines has the prominent and distinguished look of Oriental breeds but with the meat quality of native species. By the end of the nineteenth century, this giant breed was Belgium's most popular meat bird, and many other countries followed afterward.

Nowadays, you can still order a perfectly prepared Cuckoo De Malines as a delicacy in restaurants found in the Malines area.

Malines are a cold hardy breed, as they originate in Belgium, where winters can be cold. They stand cold weather better than hot temperatures. When keeping Malines, keep in mind to provide extra care during hot weather (more than 75F or 25C).

The large breed is a healthy bird and does not need much extra care except food, water, and shelter. As with any other chicken breed, they are susceptible to common poultry health dangers such as coccidiosis, sour crop and respiratory diseases.

If you're thinking about breeding with the Malines, we can assure you, there are no weird genetics involved. When crossing a Malines rooster with a Malines hen, the result is always a Malines chick. More information on breeding can be found on the official 'Mechelse Koekoek' website.

The Malines chicken was bred as a table bird, which is still what the breed is famous for. However, the Malines hens are decent egg layers, which makes them a dual-purpose breed. So they can be a nice addition to your backyard flock.

Hens lay up to 160 eggs per year. The eggs are cream-colored and large in size.

When allowed to sit, Malines hens make excellent mothers. They don't go broody more often than other backyard breeds. It can happen occasionally, but not in particular on a regular base. Due to their cold hardiness, Malines keep on laying during winter; however, egg production can temporarily decrease to a maximum of one or two eggs per week.

They only stop egg production during molting or when hatching eggs.

Malines are friendly and docile birds, that can be a great asset to your backyard flock. They're an interesting breed, curious, not skittish, and never aggressive.

They're large birds, so they will need some extra space compared to smaller breeds, but you don't have to free-range them to keep them happy. They'll be fine in confinement.

As they are very heavy, Malines won't escape or try and fly over the fencing as their body weight won't allow it. A fence of 4 foot (120cm) will suffice to keep Malines in the run. Just make sure they have enough space to stretch their legs, take a dust bath or lie around in the sun.

Malines are friendly, but due to their size, are most likely to be on top of the pecking order. They can be kept with other breeds without any problems. The roosters are quiet birds, so they can be kept in a suburban neighborhood; however, it's best to always check with your neighbors first.

Malines may look like they're not the cuddly type due to their size and heavy weight. But they're a kind and docile breed that can be a great asset to your flock. Malines were originally bred as table birds, but they are also quite good egg layers. They don't need much extra care other than water, food, and shelter and so are very beginner-friendly.