Home > Health > Why Is My Chicken Squatting?
Health

Why Is My Chicken Squatting? 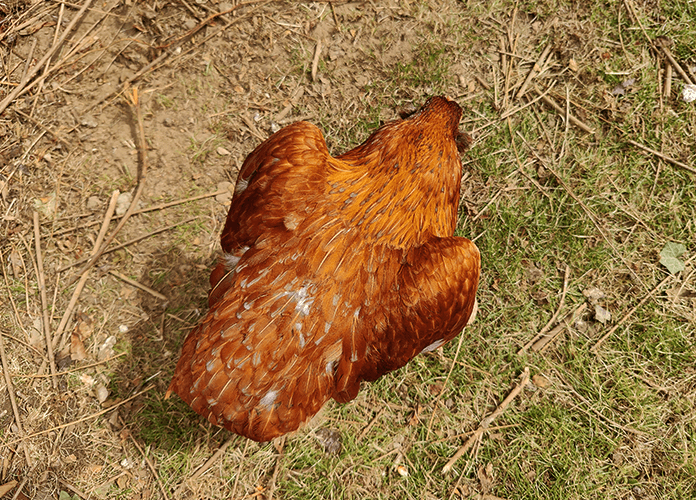 As a chicken keeper, you might have noticed your hen squat or crouch when you approach her. It almost looks like they're scared of you; however, that is not the case. This is a natural behavior for any young hen as she reaches sexual maturity.

Let's find out what this means and why your chicken is squatting.

Young hens, known as pullets, reach sexual maturity between 16 and 24 weeks, depending on the breed. Around that time, you'll start noticing different behavior in your hens as they come closer to adulthood. One of these 'changes' you're about to witness is the crouching or squatting when you approach your pullet.

By crouching, a hen is signaling she's almost ready to start laying as she reaches sexual maturity. You'll most likely find your very first egg days after you've noticed your pullet squatting for the first time.

What to expect from the first egg is hard to predict. It's not uncommon for young hens to lay weirdly shaped eggs as the reproductive system and egg-laying cycle are not entirely on point yet. As they are still young, their hormones are still stabilizing. A hen's first egg is mostly smaller in size, but soft-shelled eggs, double yolk eggs, or fairy eggs are also possible. Did you know pullets can lay two eggs a day?

So it's not uncommon for a hen to lay weird eggs at the beginning of her laying cycle. Give it some time, and you'll enjoy normal-sized and shaped eggs in no time!

The squatting position is not only a sign of your hen being ready to start laying eggs; it means she lets the rooster of the flock know she's ready to mate. By lowering her body and slightly adjusting her wings and tail, the hen shifts herself into a mating position.

If you have a rooster, you'll see her squatting for him to let him know she's ready to mate. Not owning a rooster doesn't mean your hens won't crouch. In that case, they'll see you as their rooster/leader and squat for you as a sign of submission.

Why does my hen mount another hen?

In flocks without roosters, the most dominant hen takes over his place. One Alpha-girl that controls the flock as effectively as a rooster would.

Depending on the size of your flock, you'll also see dominant behavior in the second and third hen in place. The pecking order is not only determined by actual pecking; when a hen mounts another less-dominant hen, it shows her she's the boss.

These actions can look sexual, but it has nothing to do with the dominant hen trying to mate with a female flock member, nor is it about sexual preferences. It's purely dominant behavior. Once you introduce a rooster in the all-female flock, these occurrences will stop eventually.

But when your hen is starting to crow and showing all other signs of being a rooster, there is more to consider:

Why is my hen crowing?

In rare cases, hens can start showing all signs of being a rooster, except they're not... This has nothing to do with showing dominance but is caused by a malfunction of the left ovary. Because of the ovary failure, the hen's body isn't producing the necessary estrogen levels. A hen whose left ovary malfunctions will elevate testosterone levels in her body and physically transforms into a male.

She won't lay any eggs. She crows, grows larger wattles, spurs, and comb,... But she's still a hen.

This is an uncommon and truly bizarre condition; only one in 10.000 hens suffers from what is called 'Spontaneous Sex Reversal'. That being said, your chicken can live a long and happy life, even with its sex reversal.

Other reasons why your hen squats

Submissive squatting or crouching hen is easily recognizable; you'll find plenty of photos or videos online. But what if there is more going on than normal pullet behavior? When should you worry?

Leg paralysis is a symptom of many common chicken diseases, such as Newcastle disease or Marek's disease. But it can also be a sign of low blood calcium levels or an underlying chronic inflammation like Bumblefoot. Always examine your chicken when she shows any of the following symptoms:

When a chicken's legs go limp, the chicken can't stand anymore and waddles around uncoordinated, falling to the ground. They can't reach their water and food and get weaker over time. Some diseases are pretty easy to treat, while others have a high mortality rate. When in doubt, contact your veterinarian.

When a pullet crouches or squats for you, she's reaching sexual maturity. Soon, you'll find her very first egg, probably within days after you see her squatting for the first time. It's also a sign of submission. Hens crouch for a rooster to let him know they are ready to mate.

If you don't have a rooster in your flock, this role is taken by the more dominant hen, the Alpha-hen. By mounting the hens lower in the pecking order, she shows them who's in charge. This is purely about dominance and not sexual at all.

But, next to squatting, there are things to remember when your hen has trouble walking or isn't standing up. Leg paralysis is a symptom of many common chicken diseases or conditions. When you're in doubt, contact a veterinarian.