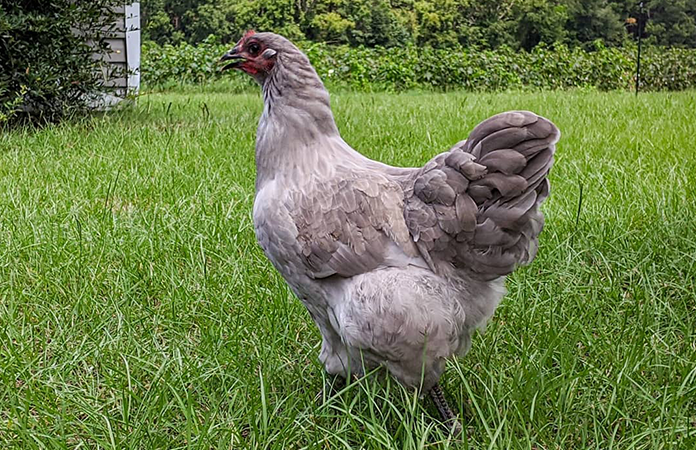 Lavender Orpingtons are conquering the world! These fluffy and docile birds are a favorite backyard pet due to their distinguished look, friendly nature, and excellent egg-laying skills.

Let's have a closer look at this beautiful large bird.

If you don't have time to read the entire article, here are some key takeaways.

Orpingtons are giant chickens. An adult hen weighs around 7-8 pounds (3,5 kg), and an Orpington rooster tips the scale at approximately 9-10 pounds (4,5 kg). Orpingtons also exist in a Bantam version. This miniature Orpington weighs around 3 pounds (1,4 kg) for a hen and 4,5 pounds (2 kg) for a rooster.

The Orpington's large body does have one significant advantage. It makes them highly tolerant of cold weather. However, the comb, especially in males, can be susceptible to frostbite, but not as much as Mediterranean breeds with larger combs.

But where does this fluffy and large breed gets its beautiful color? Let's find out more about the Lavender color in Lavender Orpingtons.

The Lavender color is gorgeous and popular amongst poultry enthusiasts. It differs from blue coloring, as blue tends to show some lacing. However, the Blue Orpington is an official variety of the American Poultry Association, while Lavender is not.

The Lavender coloring expression in the feathers is different from Blue and Splash. It dilutes the black pigments in a chicken to create a lavender shade. Unlike Blue, it also affects the red pigments in the plumage.

A separate Lavender gene expresses the hue in the chicken's DNA. The lavender gene is recessive, meaning its visible effects are masked in the presence of a dominant gene. Entirely black birds can carry the lavender gene, and there is no way to see it.

Lavender coloring is sometimes called self-blue, which can be confusing.

Orpingtons really are gentle giants. They're huge but have a friendly and docile personalities. This makes the Orpington a great company for hobbyists or chicken keepers with small children. Chicken owners describe the Orpington roosters as sweet and with protective nature, although there are exceptions. Because of their docile and passive nature, they don't mix well with more dominant breeds like the Rhode Island Red.

Orpingtons are the number one choice when it comes to quiet chicken breeds. They're exceptionally calm and won't make much noise, making them suitable backyard chickens in a suburban environment.

Orpingtons love the company of humans and will follow you around in the backyard while you're doing chores. They're curious and respond well to any attention.

Because of their dense feathering, Orpingtons are extremely cold-hardy birds. Their feathers keep them toasty warm during frigid winters. Orpingtons thrive in colder environments and are less prone to frostbite than other breeds.

Their fluffiness also makes them neglect rain, even heavy showers. Nevertheless, always watch your birds when extreme weather is on the way and provide shelter.

The downside is that their thick plumage doesn't let them tolerate heat very well. The best temperature for Orpingtons is anything below 75 degrees Fahrenheit (24°C). So it's best to take extra precautions when hot weather or a heatwave is coming.

Ambient temperatures of 85 degrees Fahrenheit (30°C) and more impact all chickens negatively, especially heavy and fluffy breeds like Orpingtons. Hot weather can cause a reduction in feed intake and body weight and affect egg production.

Orpingtons are a dual-purpose breed, meaning they are suitable as both meat and egg bird. They are great egg layers and lay up to 270 large tinted eggs annually. Because of their hardiness, Orpingtons keep on laying during the winter, so you'll have a year-round egg supply except during molting.

The Orpington hens are known to go broody quickly, making them excellent mothers. But if you're not planning to have chicks, broodiness is something you need to keep in mind, as it will temporarily stop egg production.

The Lavender gene is linked to feather problems and bad feather structure. On chicks, the feathers grow very slowly. In adults, the feathers can also show tiny black stripes.

It's especially evident in roosters' tail feathers, as the sickle feathers look lousy. The tails of hens can look shredded, but from a distance, it looks like messy feathers.

It's currently unclear what is causing these issues with the Lavender color, as the problems are not always present.

Chickens showing these problems can not be used for breeding, as they will pass the lethal factor to their offspring.

Some problems you can encounter:

Things can get complex if you outcross Lavender Orpingtons with other birds to improve specific traits. The following chart gives an overview of what can happen:

Remember that Split Lavender birds look black, and there is no way to see whether they carry the Lavender-gene. So, if you cross a pure Lavender Orpington with a 100% Black Orpington, the chicks will all look black.

If you breed back the offspring to the Lavender parents, 50% will be Lavender Orpingtons again. When you cross the siblings of the offspring instead, only 25% of the chicks will hatch lavender-colored.

If you want to learn more about 'Chicken Breeding and Genetics', check out our in depth article.

If you have a pure Lavender-colored rooster and an Orpington hen, you can start a project to create your own Lavender Orpingtons.

It involves several generations to get there, and there are multiple ways to do it. The following chart shows how to create a Lavender Orpington from a Lavender rooster and a Buff Orpington.

These are the steps to create a Lavender Orpington:

You can then use the latest generations to get better results.

For those who are interested, you can download a free breeding chart for the Lavender Orpington with the information on this page in a handy cheat sheet.

While the Blue Orpington is listed in the Standard of Perfection of the American Poultry Association (APA), the Lavender Orpington is not an official variety. The Lavender color is sometimes called self-blue.

The feathers of the Blue Orpington usually have some lacing and dark rims on the feather edges. Blue coloring also tends to be uneven or speckled. The Lavender Orpington has an even plumage without these dark spots.

The Lavender gene is also linked to bad feather structures. It's not uncommon to see Lavender Orpingtons with shredded tails. It's possible to get rid of the flawed plumage with selective breeding. However, it can be dangerous to breed with problematic birds as they can pass a lethal genetic factor.

The Orpington breed originated from Britain and was bred in the late nineteenth century in Orpington, South-East England. By crossbreeding the Plymouth Rock, Minorca, and Langshan, a new hybrid bird known as the Black Orpington was born.

The American Poultry Association recognized the Buff Orpington in 1902, later followed by the Black, White, and Blue variety. The Lavender color is not officially recognized, and it's not easy to tell when the first Lavender Orpington was hatched as the gene itself was discovered quite recently in the seventies.

Many breeders tried to hatch different chicken breeds with the Lavender gene, like Araucanas, Silkies, and Orpingtons. However, it stays unclear when the first Lavender Orpington was made.

For those who are interested, you can download a free breeding chart for the Lavender Orpington with the information on this page in a handy cheat sheet.

Some articles we referred to:

Yes, when combining a Lavender hen with a Lavender rooster, their offspring will be 100% lavender. However, breeding Lavender with Lavender should only be carried out with birds that don't have feather problems to avoid passing a lethal factor.

Yes. Lavender Orpingtons are rarer than other color varieties found in Orpingtons. This is because the lavender gene is recessive, and both parents need to carry the gene to create lavender chicks.

Yes. Lavender Orpingtons are a friendly and docile breed, suitable for backyard chicken keepers with small children. They love human company and love all attention you give them.

What's the difference between blue and lavender Orpingtons?

Blue and Lavender (self-blue) are different colors. The feathers of Blue Orpingtons feathers have dark rims, while Orpingtons are even colored. To create a Lavender chicken, you need both parents to have the lavender gene, and the offspring breed true. In Blue, that is not necessary, but they don't breed true.